The idea of the A. Quaranta Locatelli is simple: “The passion for beauty, the desire to best represent the Neapolitan land, renewing its traditions”. It sounds easy, but it is not. The company certainly has an important aces player. First, from printing to manufacturing it is true Made in Italy, and today it is not cheap. Second, it represents the high Italic artisan capacity that is renewed. Third, it continues with purity in the sartorial groove of the Neapolitan silk accessory, primarily with the seven-fold tie, but not only. Fourth, it innovates with courage the tradition by producing scarves designed by two artists “at home” not only as fabrics, but also as works to wear. Simple but constant principles that have allowed Amedeo, Silvana and Marco Quaranta Locatelli to establish the family company Quaranta Locatelli in 2008 and to continue consistently with their vision. The atelier concept is Mediterranean village style, drawing on the interior architecture of the Amalfi Coast and Capri. Even the colors and patterns chosen are often sunny and marine. The obsessive attention to detail has allowed us to launch and showcase classic products in Naples, with a clear personal touch, like what makes the dishes of many famous chefs great. First, the Neapolitan seven-fold sartorial tie, then the pocket handkerchief, revisited by Silvana in various shapes and often with the use of fabric scraps, thus reducing waste and doing recycling. Next, tailored and also custom-made bow ties. 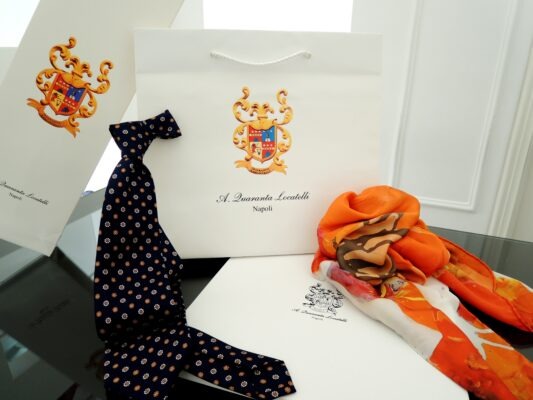 Furthermore, since 2010, the brand is committed to a new and unique project. A collection of scarves continually designed by two artists, one from Naples, the other from Japan: Antoh Mansueto and Midori McCabe. And here, thanks to the use of lasers, he completely innovates the traditional patterns of scarves starting with works of abstract contemporary art, between informal and surrealism, and then asking the two artists to integrate their pictorial style with the design of the fabric, without ever losing the character of a unique work of art that distinguishes each subject. Midori ranges from watercolor to painting, Antoh also goes so far as to create scarves and scarves designed with fingers on IPAD. Never discounted subjects, always looking to overcome an aesthetic limit. The realization on silk is always however of extreme quality, so much as to give the work printed on silk a life of its own. There are those who wear these scarves, there are those who frame them and hang them on the wall. The younger ones today prefer scarves and stoles. Art and fashion are two different but adjacent activities, and they always nourish each other: in this project they integrate each other without one aspect dominating the other. And of this, as an artist, I can give absolute confirmation. The dialogue and sometimes the heated discussion are continuous and we never abandon ourselves to the habit of flattening ourselves on the market. Innovating aesthetics is DNA. The scarves are used in artistic performances and the “Golfo di Seta” idea is launched, promoting in the advertising photos the aesthetic beauty of the product together with more or less known corners of the Gulf of Naples.

The history of the first 10 years of this company is full of awards. Yet the path followed remains intact, pure, does not allow itself to be attracted by the lure of the market. Remaining craftsmen sometimes means a renunciation in terms of market size, but exclusivity rewards the choice. The first collection of art scarves was presented in 2010 at Canottieri Napoli alongside the works of the artists. Then selection in the Prize of the Valenzi Foundation as Neapolitan excellence followed at the Angioino Castel. This was followed by exhibitions at the Palazzo della Borsa, a collaboration with Hotel Parkers in Naples, and corners in South Korea and Dubai. In terms of testimonials, collaborations with musicians. Thanks to the use of the internet immediately, the small exclusive brand sells all over the world. There are numerous Neapolitan, Italian and international newspapers that have decided to report this new genuine brand among the excellence of the Neapolitan silk tailoring accessory. The undeniable charm is that tradition and innovation are inextricably intertwined in this project. Quaranta Locatelli is certainly an “international niche micro celebrity”. Contemporary stories, in the world that integrates real and virtual, local and global. A world in which, if you want to find an excellent singularity, out of the noise of the big brands, you still have much to discover. Like the excellence of Quaranta Locatelli, which innovates the tradition of Neapolitan tailoring, masculine and feminine. Craftsmanship, technology, art and fashion together, tradition and innovation for an exclusive, unique and unmistakable project.